A Community Meeting was held on 25 April 2001, which confirmed support for the initiative, and a Steering Committee was appointed to oversee establishment of the Hospice White River (HWR).

The Steering Committee initiated the first training of carers who were known as Companions, and a competition was held at schools for the design of the Hospice logo.  The competition yielded the origins of our logo, and this was designed by 2 young school boys from White River Primary School. 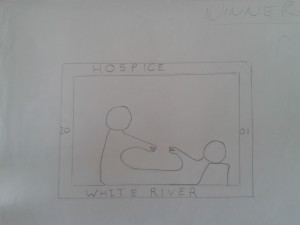 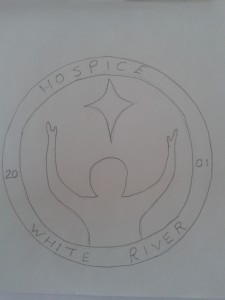 With its initial implementation, the philosophy of Hospice White River was born, as follows:

Hospice affirms life.  Hospice exists to provide support and care for the persons in the last phases of incurable diseases that they may live as fully and comfortably as possible.  Hospice recognises dying as a normal process and neither hastens of postpones death.  Hospice exists in the hope and belief that, through appropriate care and the promotion of a caring community sensitive to their needs, patients and families may be free to attain a degree of mental and spiritual preparation for death that is satisfactory to them.  Hospice recognises grief as a normal response to loss, and therefore, support to the families continues into the bereavement period.

By the time of the first AGM in September 2001, HWR was catering for the needs of 3 terminally ill patients with the help of 2 part time nursing sisters and 4 volunteers.

During the following year, a number of fundraising activities took place and donations started to come in from local community associations.

During the period from August 2002 to August 2003, HWR took major steps forward.  An ever-increasing demand for its services resulted in the number of patients increasing from four to twelve.

The former Hospice Association of South Africa which is now known as the Hospice Palliative Care Association (HPCA), provided the necessary guidelines for establishing a hospice and an application was submitted for affiliate membership.  Our relationship with the HPCA is a valuable one, and we could not operate without their input and guidance.

The value of our work became officially recognised with full membership of the HPCA and we had become a valuable community participating in fundraising events, but also supporters at home and abroad.  The demand for our services continued to increase, as did the associated costs.  Enquiries for care support for new patients had been received as far as Kiepersol, Hazyview, Sabie, Barberton, Malelane and Nelspruit.

In October 2004 HWR took occupation of a house allocated by Mbombela Local Municipality on a rental basis with the option to purchase and, after essential renovations and upgrading funded by the National Lottery, we moved into our current location at Hospice House, 19 Wildevy Street.  An office administration co-ordinator, maintenance officer and enrolled nurse were employed on a fulltime basis, as well as a part-time cleaner.  Some of these employees are still with us today.

We soon realised the need for a weekly support group for patients and their families, and a Wednesday morning gathering, included tea and eats, was initiated, supported and facilitated by volunteers.  Our administrative support systems continued to evolve into the fine-tuned and efficient operation that exists today.

In the years that followed we held many different fund-raising events, ranging from dinner-dance evenings to golf days as well as community events such as Carols by Candlelight.  Hospice White River became a respected and well-known organisation in our community, and since its inception in 2000 has cared for many patients and provided emotional support for their families.

The house next door to Hospice House became available to purchase in 2011 and we considered this as an option for a future In-Patient Unit.  Through generous donations 17 Wildevy Street was purchased and this property is to be our In-Patient Unit in the future.  At the moment the rental from the house provides valuable income for us.  Many people think that as a hospice we already have a ‘hospital’ environment, with beds for patients, but we do not have this facility as yet.  It is our goal and dream to one day be able to open 17 Willdevy Street as Hospice White River’s In-Patient Unit.  This goal will be achieved through the generosity of donors.  An in-patient unit provides end of life care for patients, as well as providing respite care where patients can come in and be cared for, for a few days, in order to provide relief for family and carers.  The establishment and consistent running of such a facility is expensive and we are not yet in a position to run a dedicated IPU.

Hospice White River was started 13 years ago by local people, for the people of this community, and continues to be supported by the people who appreciate our valuable work in the White River area.  We wouldn’t be where we are today without the passion and drive of the original members of the Steering Committee, and we’re very grateful to those individuals.

A member of the HPCA